In this week’s CityBeat, I wrote the Living Out Loud column, “Big and Gas Guzzling” where I explain how I don’t own a car and how there are several advantages to not owning one.

I also talk about how automobiles pollute our air and I give my views on this automaker bailout stuff – but that won’t be part of the question.

Here’s the question: If we were told by our local government here in Cincinnati that you weren’t allowed to drive your car into downtown for one week and that you had to take public transportation, namely the bus, could you do it?

Having Fun with Bed Bugs in Cincinnati

Cincinnati has become known as the bed bug capital of the world. Cincinnati City Council, wanting to take advantage of this, is sponsoring a new board game promoting these cute little insects here in the Queen City.

A new television commercial has even been prepared. Here, take a look.

This exciting board game will be available in fine stores everywhere here in Cincinnati beginning next month.

Will the Swine Flu Come to Porkopolis?

Posted by Larry Gross on April 28, 2009
Posted in: From the Blogroll. 2 Comments

With Cincinnati being nicknamed Porkopolis, it seems likely that this Swine Flu, sooner or later, will arrive here. Of course, Cincinnati is always last in catching up with the rest of the world and in this case, that’s a good thing.

Still, we need to know the symptoms and how to protect ourselves from this. The Huffington Post can give you an education.

Now, I must go wash my hands. Again.

A Girl Walks Into a Bar 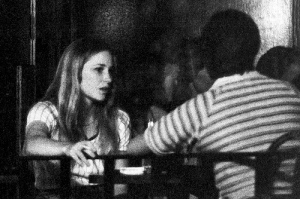 As a writer, I tend to notice the actions of other people – observe what they do. The following really isn’t a story, maybe just a bit of a character study.

A girl walks into a bar in downtown Cincinnati. I’m not going to say which one, because it’s not important to the “study.”

She’s thin, has dark, long hair and is white. She’s wearing sunglasses. I notice her red gym shoes. She orders a vodka and cranberry.

The bar isn’t crowded and I’m sitting fairly close to her. She starts talking to me and the bartender.

She says she’s from Dayton but lived for three years in New York. She’s in Cincinnati, because her boyfriend is in jail here. Her car has broken down.

She only has enough money for one drink. She’s almost broke. She says she doesn’t know her way around the city.

Feeling sorry for her, the bartender buys her another drink. The girl steps outside to smoke a cigarette. After waiting a few minutes, I decide to go out and smoke one myself.

The girl isn’t outside. I turn to my left and watch her come out a mini-market with a pack of cigarettes. I guess she wasn’t all that broke.

From a distance, I watch her smoke on the corner. People pass her by and she pays them no mind, except when black men pass her. She stops every one of them, no exceptions.

Again, from a distance, I watch her talk to them and I’m guessing she’s giving them her sob story. None of the men offer any “help.” They walk away from her.

I go back into the bar, taking a barstool future away from her. The bar’s a little busier now.

A few minutes later, the girl comes back in, gets her glass of vodka and cranberry and sits next to a black man who’s having a beer. I start to listen in on the conversation.

The girl who’s from Dayton is now from Columbus. Her boyfriend is now her brother who’s in jail. She had to sell her car to help find a lawyer to get him out.

No, not a real story here – just an observation.

Here’s a white chick that likes black men. Nothing wrong with that at all, but beware guys. This girl is a liar.

That Was the Week that Was – In Blogs

On this Sunday morning, are there questions on your mind? Perhaps looking at some of the blog entries from last week will answer a few of them.

Are you wondering what caused the recession? Maybe Andrew Sullivan at The Daily Dish can help you out.

Are you thinking about going to a car dealership and buying an exciting new Pontiac? Perhaps you should read The Cincinnati Nation first.

Perhaps you’re wondering how many Americans approve of the Republican Party. If you are, let Wonkette provide you with an answer.

Is it necessary for Oprah to defend her hair? I don’t know, but The Huffington Post does.

Do you like midgets? Find out if you do from Aileen McGrath at The Daily Beat.

Has good old Dick Cheney ever lied about using torture? Find out the real truth from Taylor Marsh.

And finally, is tomorrow Monday? Hey, you shouldn’t need a blog post to tell you that.

I Swear, Honest to God – We Used to Have Some Fun in Cincinnati

Let’s go down memory lane, shall we – back to the 70’s and 80’s when Cincinnati wasn’t so uptight. If you weren’t around then, just consider this an education on the good old days.

Anybody out there remember Bob Shreve? He hosted a late night show on channel 12 called the “Past Prime Playhouse.” There were always rumors that Bob was bombed while doing this live show but none of us really cared. He was funny.

Anybody remember Morganna? She was an exotic dancer here – I think over in Newport – and was also known as baseball’s kissing bandit.

Find out more about this when Bob meets Morganna in the video down below.

Funny how Bob makes the comment that it’s strange nobody would notice Morganna entering Riverfront Stadium. She is a bit hard to miss don’t you think?

It’s all history now. Bob died some years back but I understand Morganna is still alive.

Don’t try this again, Morganna. Cincinnati is so uptight now, you would probably be sent to prison for kissing a Cincinnati Red.

(Photo of Morganna found on Google)

Posted by Larry Gross on April 23, 2009
Posted in: From the Blogroll. 2 Comments

I have to admit, I knew nothing about Twitter. It took Maureen Dowd’s column

in The New York Times yesterday to give me a bit of an education.

Maureen makes it pretty clear she’ll never have a Twitter account and at this point, I totally agree with her – but I’m also a person who stated loudly that I would never have and never use a cell phone. Look at me now. What would I do without it?