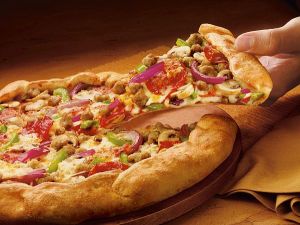 When I ask questions about food, I seem to get a response – well, at least I did when I wanted to know your favorite chili place in town.

Tell me, what’s your favorite pizza joint in Cincinnati?

In Lazy Cincinnati, One Must Have Fun Anyway One Can

There I was in downtown Cincinnati on Opening Day just as the game was letting out.

I was having a sandwich in Arby’s (yes, I know the place sucks, but I didn’t have a lot of money and had a coupon – alright?) and I watched as people would come in to use their restroom.

They were mostly guys and I would tell most of them were a little drunk on beer. You know what they say about beer. You can’t buy it, you can only rent it.

So the guys needed to empty their bladders. Why not take a quick piss at Arby’s? I mean the place smells like urine anyway.

The thing is, you can’t take a quick piss there. The restroom door is always locked.

Sitting there eating my sandwich, I watched guy after guy go to the restroom door only to find it locked. In many cases, a look of panic came on their faces.

One by one, I would watch these guys run to the Arby’s cashier to get the key, then run back to the restroom to get the door open. A few guys almost didn’t make it.

I know, maybe it’s a little sick, but I was having a good time watching these people almost pee in their pants. I’m thinking about making this my annual Opening Day event.

In Lazy Cincy, one must make their own fun.