(We’re having a few problems here on this WordPress blog this morning – don’t even know if the video is working. Maybe Hurricane Sandy is messing this up too. We’ll fix it when we can)

Update – I’m sorry about the comments that didn’t get posted here today. I’ve written the post for tomorrow and it appears WordPress is slowly getting back to normal. Fingers crossed.

Now you kids be careful out there tonight.

I remember seeing “The Exorcist” back in 1973 with some friends. It disturbed us so much; we had to see another movie right afterwards. That movie was “Blazing Saddles.” We saw two classics in one night.

“The Exorcist:” I guess anything can be considered funny if you add a laugh track. 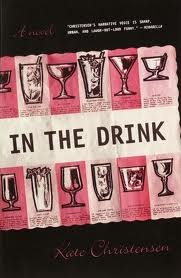 A friend that I have here in Covington wanted company going across the Ohio River to Cincinnati for a doctor’s appointment yesterday morning. I normally don’t do this type of thing, but he caught me at a weak moment. I said I would go.

Getting ready to meet up with him, I had regrets. Because of Hurricane Sandy on the East Coast, the weather  here was shitty, but a deal was a deal.

He doesn’t drive and I don’t either, so that means taking the bus. I like to read on the bus and usually take a book with me. On this particular morning I took “In the Drink,” a novel written by Kate Christensen.

My friend doesn’t do a lot of talking which is fine with me. On the bus, I was busy reading my book.

“What are you reading?” by friend asked. I showed him the cover.

“Oh, I’ve heard of that book,” he said. I nodded my head and continued reading.

He didn’t say anything else for a minute, but then said, “Why are you reading a chick lit book?”

“Yeah,” he replied. “It’s like that ‘Bridget Jones’s Diary’ book. Chicks love that kind of stuff.”

I went back to reading my book. A few minutes later my friend said with a chuckle in his voice, “Are you a chick?”

“Apparently,” I said, feeling annoyed. “I read this a couple years ago and enjoyed it so much, I’m reading it again.”

My friend just looked at me.

“Have you ever read a chick lit book?” I asked.

“Then you really don’t know what you’re talking about.” I replied.

I turned my attention back to the book. We made it the rest of the way to Cincinnati in silence.

I don’t think there is any such thing as a “Chick lit” book. A reader can read what a reader wants to read and the next time my friend has a doctor’s appointment, he can go by himself, even if the weather is perfect.

In an effort not to be flip about this, you can get updates on Hurricane Sandy right here.

It’s not likely Hurricane Sandy will reach Cincinnati or Northern Kentucky, but today and tomorrow, we could see wind gusts from 40 mph to 45 mph. That’s pretty windy.

Hurricane Sandy: Is this a he or a she? I liked it better when hurricanes were named after women. I think I’m going to consider this one a she.

Thinking about the name Sandy, I don’t have any friends named that. Back when I was a kid, I knew a girl named Sandy but never a guy named Sandy.

I know. It’s not important.

Just so you know, none of this is in any kind of order.

(I found the graphic on the internet last week)

On one of those nice afternoons this week, I was simply sitting on a bus bench on Madison Avenue here in Covington enjoying the weather. I see this guy around a lot and we talk sometimes and I saw him on that afternoon and he asked me out.

So here we go again. I’m not going to go into the details as I’ve written about this before in CityBeat.

What I should have done is ask the guy why he thinks I’m gay, but I didn’t.  At this point in my life, I should have just told him I’m neutered.

(YouTube video. Yeah, the quality is crap but it’s the only one I was “allowed” to use)

There I Was, In Covington Chili

There I was, in Covington Chili, waiting on this college student. I have this friend who teaches a college writing class and sometimes he gives my name out to students who need to interview a writer. I am a writer but I’m not very good at explaining what I do. It makes me a little uncomfortable.

I looked at my watch. The student was 10 minutes late. I told the waitress I was waiting on somebody. I got a Diet Coke to drink. Come to think of it, it was a Diet Pepsi.

That new Whack Burger place is only a few doors away from Covington Chili. I guess I could have met up with the college student there, but I figured Covington Chili needs my business more. I mean it was the lunch hour and the place wasn’t busy at all.

I looked at my watch again. The student was now 15 minutes late. I know I can always get the time of day by looking at my cell phone, but I still wear a watch.

The waitress came back over and asked me if I still wanted to wait. Right around that time, the college student came in. She was a cute little girl—blonde hair, blue eyes, all that. She had a small tape recorder with her.

I ordered a cheeseburger with fries. She got a club sandwich. She turned on the tape recorder and the interview started—boring stuff, at least to me and I’m not going to bore you with it.

I knew she would ask this. Everyone who interviews me always does. “What’s your favorite column that you’ve written?” My answer has kind of become routine. It’s “Pretty in Pink.” I don’t know if this is my favorite column or not but it’s the one that basically wrote itself.

I just got done going to CityBeat’s web site to see if that column is still around as it was written in August of 2007. I’ll be damn. It is still around.

My cheeseburger and fries were only so-so. Next time I meet a college student for lunch, we’ll go to Whack Burger.

Free to be Himself

Going for my morning walk here in Covington, I ran into someone that I know, but he almost had to introduce himself to me.

Walking up Madison Avenue, I heard someone from behind me yell, “Hey Larry!”

I turned around and saw this gentleman smiling at me. His graying hair was down to his shoulders. Under his jacket, he had on a tie-dye t-shirt. Around his neck was a gold chain and on his fingers were many rings. He looked like an old hippie—nothing wrong with that. I sort of look like an old hippie myself.

As we made small talk with one another, I started to recognize his voice. Then I figured out who the man was.

I knew the man from CityBeat, maybe 12 years ago. He was our UPS driver. It was Mark.

He’s retired now, has lived in Covington for the past 20 years.

We shook hands and both went on our way. Continuing my walk up Madison Avenue, I thought to myself I was finally seeing the real Mark. UPS drivers can’t wear tie-dye t-shirts or have long hair or chains around their neck. Mark was finally free to be himself.