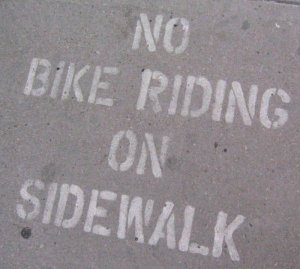 There are a lot of people who ride bikes here in Covington, Kentucky. I guess that’s a good thing—better than spending money to put gas in a car, better for the environment and better for the person doing it. You know, it’s healthy. In other words, I’m all for people riding their bikes. Just not on the sidewalk.

Riding bikes on the sidewalk is a common thing over here, especially on Madison Avenue. As a walker, more than a few times, I’ve had to get out of the way of a person riding a bicycle. Yesterday, I almost got hit by a guy. If he hadn’t yelled “Look out!” I would have.

I’m thinking like in most other states, it’s illegal to ride your bike on the sidewalk over here. I thought about calling the Covington Police to find out about this but I didn’t, don’t want to bother them.

Maybe the police here don’t want to bother the people riding the bikes on the sidewalk. They have to see these people like I do, but in living here for over two years now, I’ve never seen a cop give a bicycle rider a ticket.

The police should know the law, but maybe these people riding their bikes on the sidewalk don’t.  As a public service, here’s a link to confirm that law along with some other rules when it comes to bikes and sidewalks.

I’ll be back here on Sunday with another post—that is if I don’t get run over by a bicycle.

12 comments on “Bikes and Sidewalks”