See that walker in the photo? That’s Vee. I use Vee when I’m traveling down sidewalks that I’m not familiar with or that are uneven. I’ve probably said this here before.

Vee and I were out and about one morning last week running errands here in Covington, Kentucky when we ran into Bear, a friend and neighbor. He’s got one of those motorized wheelchairs and he can fly down the sidewalk in that thing like you wouldn’t believe. Vee and I just take our time. Lately, Bear’s taken to laughing at us.

“When are you gonna get rid of that thing and get a chair like I’ve got?” He’ll say. My reply is usually, “We’re slow but sure.”

The day after I ran into him, he knocked on my apartment door, told me about a guy two floors up from me who has a motorized wheelchair for sale—$300. I told Bear I may look into it.

I decided not to. There may come a day when my legs no longer work at all, but for now, they do—again, slow but sure. I’m gonna keep walking and using a cane and/or Vee for as long as I can.

I forgot all about Bear and that motorized wheelchair he wanted me to look at. Apparently, he didn’t. Last Saturday morning, when I was working at my writing desk, there was a knock on my door. Looking out my peephole, I saw a man sitting in a wheelchair. I opened the door.

I didn’t know the man. He said, “I heard you’re interested in getting a chair like this.” He pointed at his wheelchair. I couldn’t help but notice he was slurring his words a bit.

“Bear most have told you about that,” I said.

“I’ve decided I don’t want to get one right now,” I said. “I need to keep walking and staying on my feet for as long as I can.”

“Oh, I can walk too!” the man said. He stood up and almost immediately, a pint of vodka fell out from underneath his shirt. He looked at me for several seconds before bending over to pick up the bottle that had fallen to the floor. When he did, he almost fell over himself.

“Feeling a little thirsty this morning?” I asked.

He got back in his wheelchair and started rolling to the elevator. I closed my apartment door, locking it.

It wasn’t even eleven o’clock in the morning when that pint of vodka fell out from under the man’s shirt. I don’t really care what the guy does. I mean, it’s his business if he wants to be drunk that early, but do I want to buy a used wheelchair from him? I don’t think so. I’ll just keep using Vee whenever I need to.

(Photo of “Vee” the walker taken by me) 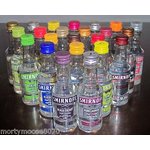 Here in Covington, Kentucky, down at the corner of happy and healthy—I’m talking Walgreens on Madison Avenue—they sell little bottles of vodka. They will probably make a person happy for a while but not very healthy. Walgreens should know better. Just saying.

Now I’ve never purchased any of these little bottles, have just noticed them behind the counter when a Walgreens cashier is checking my stuff out—not my personal stuff, you understand, just the items I’m purchasing. I’ve noticed the price on those little bottles. They’re 99 cents each. I have a feeling Walgreens sells a bunch of them.

Friday afternoon I was heading over to Walgreens to pick up a few things. As I was leaving my apartment, so was my neighbor. I’ll call him Ronald here.

“Hi, Ronald,” I replied as we both headed to the elevator.

“What?” I replied as we both got on the elevator and as I pressed ‘G’ for the ground floor.

“You know those little bottles of vodka they got over there?”

“Can you pick me up a couple?” he asked.

“Do you have any money to give me?”

“No,” Ronald said. “They only cost 99 cents, just thought you would do a neighbor a favor.”

I don’t have anything against Ronald, he’s always fairly nice, but he has asked me for money before and that was basically what he was doing this time . It’s never big amounts—has wanted change on a few occasions or a buck here and there—but I don’t loan out or give money to neighbors. You know what happens when you start doing that shit. He always takes it well when I say no, but then again, it never stops him from making the request days or weeks later.

I’ve been Ronald’s neighbor for over a year now. He always says, “Hey, neighbor.” As we got off the elevator, I decided to ask him a question.

“What’s my name?” I asked Ronald. He just stared at me.

“Do you know what my name is?” I said. He continued to stare.

I left him standing in the lobby as I left the apartment building.

Walking down to the corner of happy and healthy, I thought of my neighbor Ronald.

Here’s a guy who has asked me for money before and now is asking me to buy him alcohol. He hasn’t even taken the time to remember my name.

Hey, neighbor, you can buy those little bottles of vodka all on your own.